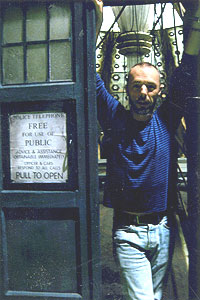 I have been a wig maker / make up artist for 30 years. I started off by training as a make-up artist and on leaving college I got my first break on a west end show – ‘Aspects of Love’. I have a lot to thank Lord Andrew for – Aspects was my first job, ‘Sunset Blvd’ was my first HOD, (Head of Department), position, and also was my first supervisor job, ( in Germany, same show, different language), ‘Jesus Christ Superstar’ was the first show I turned down. (  but was the make-up supervisor for the cast changes) . Angela Cobbin made some brilliant wigs for the show.

I stopped HOD’ing shows after ‘Dr Dolittle’ but it was that show that kick started an eratic career as a supervisor … eratic because I do film work as well as sitting at home making things such as; hats, masks, headwear of any sort etc.

I have a theatrical bent – I guess thats why I was asked to design the opera make-up’s for Peter Robb King in the first Christian Bale ‘Batman’ movie – blink and you’ll miss it!  I can do normal things as well, check out the stuff for ‘Kaitangata Twitch’, a 13 part tv series I designed for NZTV, or the wigs and beards for Stolen, the 1860’s drama  I designed with Alice Eve and Jack Davenport. Gritty realism was also needed when running the crowd on the 3rd and 4th seasons of Poldark. And now running crowd on Britannia – Celts, Romans and Druids, it’s also pretty down to earth.

But I love the mad, and the over top and my brain tends to like a challenge. How can we make someone look like they are turning into a piece of furniture? I had to do that twice, once for the wonderful [Madeleine Boyd] on a production of ‘Pelleas et Melisande’ at Sadlers Wells and once when I went to South Africa and did the ‘A’ production ( means it has to look like Broadway) of ‘Beauty and the Beast’. The wardrobe’s headwear was unwearable so I armed myself with expanding builders foam and fabric – and the end result, part wig, part headwear came out rather well.
Check it out in the [Theatre Gallery].

I spent a month on the Isle of Man filming ‘Libertine’. Peter Owen designing and was asked to do 16th century theatre wigs, so two coat hangers and an old fabric shopping bag, plus miles of weft and I produced a dramatic wig!
Check it out in the [Film Gallery].

I like thinking around corners. Sometimes I get too keen and make stuff just to see if I can. “I wonder if…” is a thought I have come to dread! I know it means I want to see if it can be done. There are some short films of my ‘I wonder if’s’ when I got a bit carried away with trying to get a job designing/making the wigs for ‘The Little Mermaid’, (oh and I didn’t get it and now there are some people at Disney who think I am nuts!).

What I like about this industry is you never stop learning. There is always something new to do, some other way to get an effect. A wig for a Werebear in The Hobbit, ( yes I did that, two and a half years in Middle Earth,  working with Peter Swords King)  17 Bishop Wigs for the coronation scene in the film ‘Young Victoria’ or a self supporting loop of hair in the tv mini series Marco Polo, for Joan Chen. We need wigs for giants – eight feet tall in the film ‘Beowulf and Grendal’, and then 15 feet to 25 feet tall for the sculptural artist Ron Mueck and his amazing life like statues for which I used horse hair.  (Sarah Weatherburn made the wigs for the little people in the same exhibition).

How do you make an opera singer look like a snake, a rose, water?  That was for ‘The Little Prince’ … a job I am really proud of. The show was designed by Maria Bjornsen, who sadly died before it could be filmed. Sue Willmington took up the design reigns, and under her supervision I created the hair and make-up for the BBC production of it. I had some fabulous help from Laura Morse and Sharon Colley with looking after people like Lesley Garrett, Willard White and Aled Jones.  Sue also gave me the  job making over 50 wigs for the Las Vegas production of Phantom of the Opera, as well as supervising/making/running the wigs for two big shows at the Albert Hall – ‘Boheme’ and ‘Show Boat’. I have done over 8 films with Jenny Shircore, doing everything from making and dressing wigs to making up extra’s feet … always interesting stuff!

I like making things and working with my hands, thinking, being challenged, everything from moustaches for Johnny Depp in Mortdecai or  Simon Callow on the film of ‘Phantom of the Opera’,  to over 40 headresses for a production of ‘Copa Cobana’, a favourite of mine.
Check it out in the [Theatre Gallery].

If there is a project you have where something needs real thought with a personal touch, please do not hesitate to get in touch with me.